Friday the 22nd of February saw the return of the popular Orient Travel Tourism Authority of Thailand Monthly Medal and Net and Gross Order of Merit supported by Emirates. The star on the day and winning the February edition of the event was Matt Heptonstall. Matt had an unbelievable front 9 going out in a superb net 29, this was helped by a brilliant run of 4 holes going eagle, birdie, eagle, birdie. He let a few shots slip on the back 9 but this blistering front 9 was enough for him to win by 4 shots. In second place it was SGSC member Shaheen Butt who has been very consistent of late and posted a net 72. In third place only by virtue of countback was Namir Al Naimi who also posted a solid round of golf with a net 72.

Young Duk Kim topped Division A as he posted a score of 76. Whilst in Division B Raj Ranavaya collected top spot on 72. Finally, Ramsey Yassin posted a steady round of 75 which was enough to claim first place in the Gross Division.

In the Order of Merits there has been a bit of movement, Garry Hibberts net score of 74 gave him 16 points to add to his total and move him to the top of the net division, with only 9 points separating the top four there is still everything to play for. The Gross Division is a different case with Nathan Fisher 31 points clear of the pack. Nathan has played some fantastic and consistent golf over the duration of the event. The Order of Merits will run throughout the season & conclude on Friday 26th April 2019 the next event is the 22nd of March.

Young Duk Kim wins back to back Unitechnik Stablefords 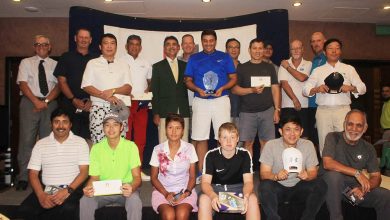