Sheikh Mansoor takes over the patronage of the Tour’s final Rolex Series event from His Highness Sheikh Hamdan bin Mohammed bin Rashid Al Maktoum, whom he has replaced as chairman of the Dubai Sports Council.

Since its inception in 2009, the tournament has become one of the most high-profile events on the golfing calendar, with past winners including Lee Westwood, Rory McIlroy, Henrik Stenson, Danny Willett and the reigning champion Jon Rahm, who last November claimed the title for the second time in three years and was also crowned the 2019 Race to Dubai Champion.

It is one of only four events in the emirate with a five-star rating as part of the Dubai Sports Council’s Sports Event Ranking System.

“Dubai is one of the top sporting destinations of the world, especially for golf fans and aficionados, and it is only befitting that we host the season-ending finale of the European Tour here.

“Dubai has been home to the DP World Tour Championship since 2009, and the event has produced some of golf’s most memorable moments through the years. We have also seen the season’s most consistent performers honoured here alongside the tournament winner, with the Race to Dubai champion being crowned at the Earth course.

“This event, then, is a double-celebration for golf, and this year, it will hold an even greater symbolism given all the challenges we have faced since the COVID-19 outbreak.

“Under the patronage of His Highness Sheikh Hamdan bin Mohammed bin Rashid Al Maktoum the tournament has been a truly fitting finale to our season-long Race to Dubai.

“We thank Sheikh Hamdan for all of his support and we look forward to working with His Highness Sheikh Mansoor bin Mohammed bin Rashid Al Maktoum to ensure the continued success of this prestigious tournament on the world stage.

“We are also grateful to our title sponsor DP World, as well as our event partners Jumeirah Golf Estates, Rolex, Emirates, BMW, Atlantis, the Palm, CNN and Zurich, along with Emirates Golf Federation, Dubai Sports Council and Dubai Tourism.”

An additional event was recently announced by the European Tour with the Golf in Dubai Championship presented by DP World set to be played on the Fire course at Jumeirah Golf Estates the week preceding the DP World Tour Championship, December 2-5, meaning the emirate will play host to a captivating double-header to bring the 2020 season to a close.

Attendance at both events will be for invited guests only. Golf fans can follow the action on the Dubai Sports channel in the UAE or by tuning into their local network as well as staying up to date with all of the action at www.europeantour.com and on the European Tour’s social media channels.

Both tournaments will be subject to stringent safety and testing protocols set out in the Tour’s comprehensive Health Strategy which will continue to evolve, aligned with international Government guidance and health guidelines. 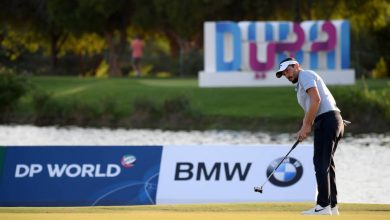