The season-ending Dubai double-header begins on Wednesday as the Fire course at Jumeirah Golf Estates opens its doors to the European Tour’s finest players for the inaugural Golf in Dubai Championship presented by DP World with plenty still to play for as the Race to Dubai draws to a close.

Taking its place in the limelight alongside its illustrious sibling next door, the Fire course gets its chance to shine and will stand in sharp contrast to Earth Course, which has hosted the DP World Tour Championship since 2009.

While the Earth is a bold attack on the senses with bright white sand and deep red bark offsetting the lush greens fairways, the Fire course provides a more natural visual dynamic. The terracotta sand gives a rustic touch and the ruggedness of the fescue in the rough and around some bunkers links the course to its immediate surroundings. Contours are less subtle and the greens are slightly easier targets than those found on the Earth, in that they are not as raised, and the greenside bunkers are not as deep.

A high-caliber cast of characters are hoping to light up the course, including a smattering of Major champions, a host of Ryder Cup heroes and countless European Tour winners from this season and beyond.

Major winners Danny Willett and Martin Kaymer headline the field and both have past experience of success in the UAE, with Willett winning the 2016 Omega Dubai Desert Classic and 2018 DP World Tour Championship and Kaymer triumphing three times at the Abu Dhabi HSBC Championship throughout his career.

Englishman Aaron Rai can put himself into contention to take the Race to Dubai crown with what would be his second win of the campaign, following a maiden Rolex Series title at the Aberdeen Standard Investments Scottish Open.

The addition of this week’s Golf in Dubai Championship presented by DP World completes the revamped schedule for the European Tour, which now includes 15 new events which did not exist prior to the season being put on hold after the completion of the Commercial Bank Qatar Masters in March before restarting in July. 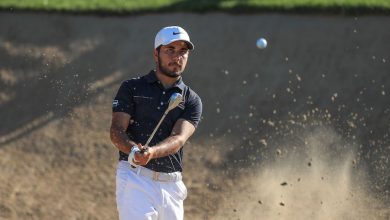 Ahmad Skaik ready for the challenge