The afternoon stableford saw 36 junior golfers from nine schools and clubs tee off with hopes of pulling back the nine-point lead BSAK Cormorant team had leading into the final.
Darren Hall, Nathan Loveridge, Emily Siegel and Tariq El Chaib from the BSAK Cormorant team continued their solid form through to finish with a total of 52 to take their league score to an impressive 306. The hard-fought efforts of Dane Standford, Daniel Whittaker, Leah Holden and Eion Cuniffe saw the Al Ain Equestrian, Shooting and Golf Club team capture the runners up position with a score of 47 points in the final, taking their final league score to 292.

“It feels great to have won the league and I’m glad we all managed to play well enough as a team to win this season,” said Darren Hall. The league is great because to win you have to play well across all the tournaments, so it shows how good and consistent you have to be. I love golf because it’s fun and it teaches you life lessons.”
Gustav Adestrom from Abu Dhabi Golf Club carded the lowest score of the day, winning him Best Stableford Score, while Ryan Hunter from Al Yasmina School won the Nearest to the Pin competition. Ryan also won the Ambassador’s Award, which recognised his consistent performances and commitment to the ADSCL, along with his leadership skills.
The 2013 ADSCL, which has seen over fifty children battle it out on the UAE’s courses since it first teed off in November last year, was sponsored by Rosewood Abu Dhabi and spearheaded by Saadiyat Beach Golf Club’s junior golf expert P-J Van Merch. This was the league’s second season, which saw participation more than double from its inaugural year.

The ADSCL is an initiative developed by Troon Golf Abu Dhabi and is aimed at encouraging more junior golfers to play competitively. With over 500 juniors enrolled in coaching programmes across Abu Dhabi, very few were competing in tournaments. The ADSL was established to fill this gap, says P-J Van Merch.
“We have been delighted with the success of the ADSCL which has grown quickly in stature in just two years,” said Van Merch.
“The league allows children to play on some of the UAE’s top golf courses for free and acts as a springboard for a potential professional golf career. ADSCL is not purely aimed at the best players in Abu Dhabi, but gives youngsters an opportunity to enhance their game, develop friendships and gain a broad range of life skills along the way.”
Mohamed Badawy Al-Husseiny, a parent of one of the players, said: “As soon as my son heard about the league he woke me up in the morning to tell me that he needed to get involved. It’s exciting, I might add, for the parents as well as the children, to see them get so involved in their golf and to gain the opportunity to compete.”

Announcing the winners after the final on the hawksbill restaurant terrace at SBGC was Roddy Gordon, Director of Marketing at Rosewood Abu Dhabi, and Van Merch. The young golfers congratulated each other as winners went up to claim their prizes, which were donated by Rosewood Abu Dhabi. As well as their magnificent crystal trophies, the BSAK Cormorant team won four Taylormade – RBZ golf bags.
Gordon said: “We have loved being involved in the ADSCL as it incorporates our same brand values. We initially got involved after meeting P-J and immediately sensed his passion and enthusiasm for using golf as a tool to make a positive difference in children and the community. We have witnessed the excitement and competitive energy amongst the kids, and know that they went home delighted to participate in something that was worthwhile, and which we were extremely pleased to have been a part of.”

After the success and growth shown in 2013, the ADSCL will continue next year, aiming to enrol a record number of 80 junior golfers in 2014. 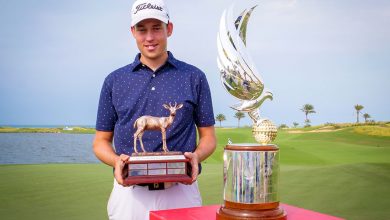 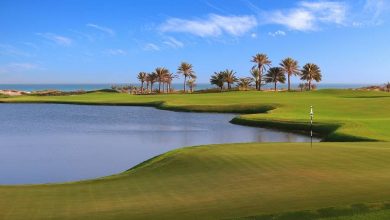 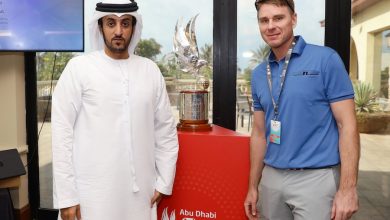 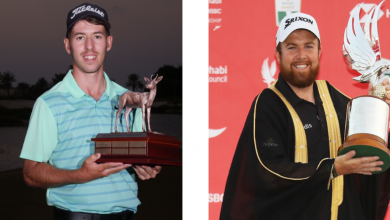