Arjun Atwal rode on a two-shot swing on the final hole to win the inaugural DUBAi Open, ending a title drought that lasted 1,571 days at The Els Club, Dubai on Sunday.

Trailing by one shot going into the 72nd and final hole, India’s Atwal made a brilliant up and down for birdie while his playing partner Wang Jeung-hun, who led the field most of the day, could only manage a bogey six after a wayward second shot, which finished in a bush.
The 41-year-old Indian, one of four overnight leaders at the final tournament of the 2014 Asian Tour season, ended a day of high drama by signing off with a six-under-par 66 and a winning total of 16-under-par 272 while Wang carded a 67. Scotsman Simon Yates took third place following a 68.
“This one feels really special,” beamed Atwal after receiving the winner’s trophy from Shaikh Mansour bin Mohammed bin Rashid Al Maktoum. Shaikh Fahim bin Sultan Qasimi, president of the Arab Golf Federation, Saeed Hareb, secretary-general of the Dubai Sports Council, Khalid Al Zarooni, president of Dubai Sports City, Abdul Rehman Falaknaz, also of the Dubai Sports City, Mohamed Juma Buamaim, vice chairman and CEO of golf in DUBAi, and Kyi Hla Han, chairman of the Asian Tour, were also present.

“I think the last time I won on the Asian Tour was 2008 (Maybank Malaysian Open). I’ve gone through some really tough times the last few years with injuries and losing my card on the PGA TOUR. I was at a point where I almost wanted to quit. Thanks to my family and friends, I didn’t, and here we are,” said Atwal, whose last victory came at the 2010 Wyndham Championship on the PGA Tour.
Atwal paid tribute to Wang, who looked so much in control of the final round before making those late bogeys to hand the Indian his eighth Asian Tour title and a cheque for $USD90,000.

“It was more relief than anything else that the day is over. I was struggling a little bit with my nerves but it was a gift today. I haven’t won a tournament like this where someone has actually gifted it to me. I got lucky,” said Atwal.

“He’s a great young player. I can’t believe he’s only 19, he’s young enough to be my son. It’s a tough loss for him but I’m sure he’s going to win a lot,” added the Indian, who has played on sponsors’ invitations in his last five tournaments on the Asian Tour.
19-year-old Wang, who has not missed a single cut this season, produced a flawless outward 31 and led by three shots at one stage before his late blemishes. He opened the door for Atwal with a second bogey of the day on 17 when he three-putted before missing a 10-foot par attempt on the last hole.

“I had a lot of pressure. I just tried my best. I don’t have any regrets, I did my best,” said Wang. “I just tried to play my game, but I couldn’t do that because of the pressure.”
Darren Clarke of Northern Ireland started the day one off the lead but was never a factor as he signed off with a 72 and a tie 15th place while England’s Matt Fitzpatrick finished tied 19th on eight under.
The MENA Golf Tour contingent had something cheer about as Joshua White and Chris Cannon finished in a tie for 24th on seven-under while Morocco’s Mehdi Saissi won the medal for the leading amateur in the field.

“The experience of playing in the DUBAi Open has just been amazing,” said Cannon, who opened with a 67. I loved every minute of it. I may have left a few putts out of there, but can’t complain as I gave 100 per cent,” said Cannon.
White echoed similar sentiments, saying: “Without the MENA Golf Tour, we wouldn’t have received the opportunity to play this event. I would like to Mohamed Juma Buamaim and his team for doing so much for golf in the region.” 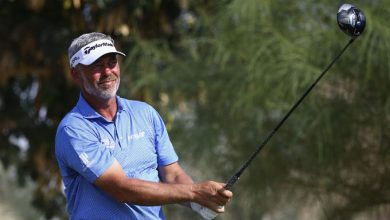 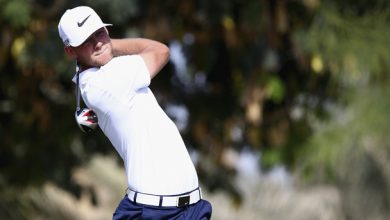 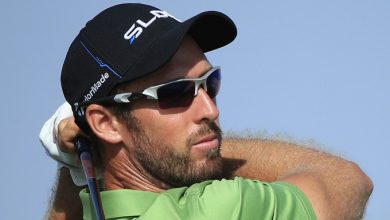 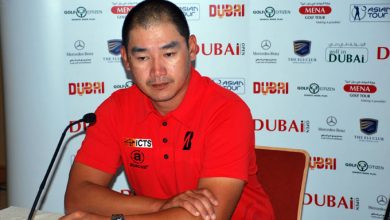