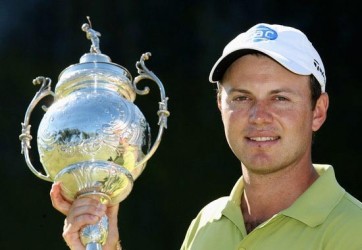 Richard Sterne edged out Gareth Maybin on the first extra play-off hole to become the eighth consecutive home winner of the South African Open Championship after both players finished their 72 holes tied at 274 at Pearl Valley Golf Estates.

The home favourite, who won the Alfred Dunhill Championship seven days ago, shot a final round 66 to move into contention after overnight leader Lee Westwood wilted through his final 18 holes and eventually ended a shot off the pace at 13 under for the tournament.

Sterne`s third shot at the par five 18th in the play-off went to within a few feet to put pressure on his Northern Irish rival who could not sink his birdie putt.