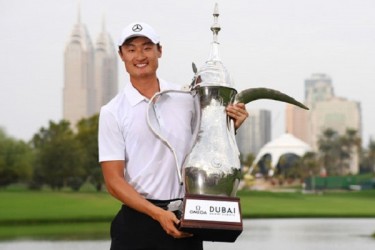 Li Haotong produced a late burst of scoring to hold off the challenge of Rory McIlroy and win his second European Tour title after a thrilling final-day battle at the Omega Dubai Desert Classic.

The Chinese entered the final day a shot clear of McIlroy but trailed by two after ten holes as the four-time Major winner looked on track for a third victory at Emirates Golf Club.

Li then birdied four of his last six holes to sign for a closing 69 and get to a record low event total of 23 under par, beating the Northern Irishman by a single stroke.

His stunning finish under incredible pressure further cemented his reputation as one of the European Tour's great clutch performers, following on from a closing 63 at last season's Open Championship and a fourth-round 64 to win on home soil at the 2016 Volvo China Open.