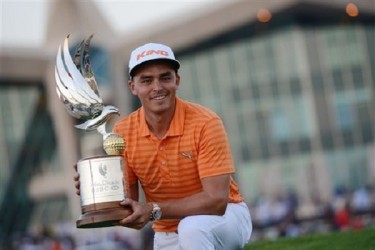 The World Number Six held a three-shot lead at the turn but while he made seven straight pars on the back nine, McIlroy came home in 31 with an eagle at the last and Stenson came back in 32 to sit one shot behind the leader in the clubhouse.

Fowler was not to be outdone, however, and he chipped in on the 17th to open up a two-shot lead, with a par at the last enough to keep him at 16 under and hand him a one-shot victory over Pieters, who birdied the final hole.

The 27-year-old had earlier holed from a bunker for an eagle on the eighth immediately after a double bogey on the seventh cut his advantage to one on a dramatic final day at Abu Dhabi Golf Club.