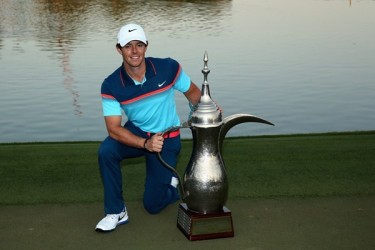 Rory McIlroy produced an immaculate display of front-running to win the Omega Dubai Desert Classic for a second time at Emirates Golf Club.

The World Number One, who had been in front since his sublime 64 on Friday, closed with a two under par 70 to win by three shots on a tournament record equalling 22 under par: only Thomas Bjørn and Stephen Gallacher had previously won with such a low total.

Sweden’s Alex Noren, who missed almost all of 204 with tendonitis in both wrists, carded a final round 65 to announce his return to action with a runner-up finish – his best on The European Tour since 2011.