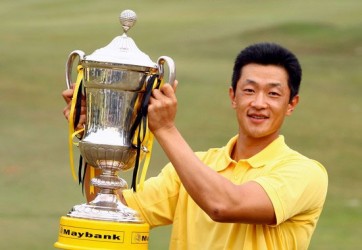 Anthony Kang of the United States ended an eight year victory drought by rolling home a short birdie putt at the final hole to emerge from a tightly bunched field for a one stroke victory at the Maybank Malaysian Open.

The 36 year old began the final round two shots behind overnight leader Adam Blyth of Australia but closed with a five under par 67 at Saujana Golf and Country Club’s Palm Course to win the US$ 2million event, which is co-sanctioned by The European Tour and the Asian Tour.

The American finished with a 17 under par 271 total for the biggest win of his career and first on the Asian Tour since the 2001 Myanmar Open. The victory was Kang’s first on The European Tour.

“It feels wonderful,” said the American. “I’ve been playing in Malaysia since 1996 or 1997 so to finally win this event, I’m speechless. This feels like where I started to play golf so to win this tournament is just beyond beautiful.”